How to Formulate a Bakuchiol Beauty Concentrate 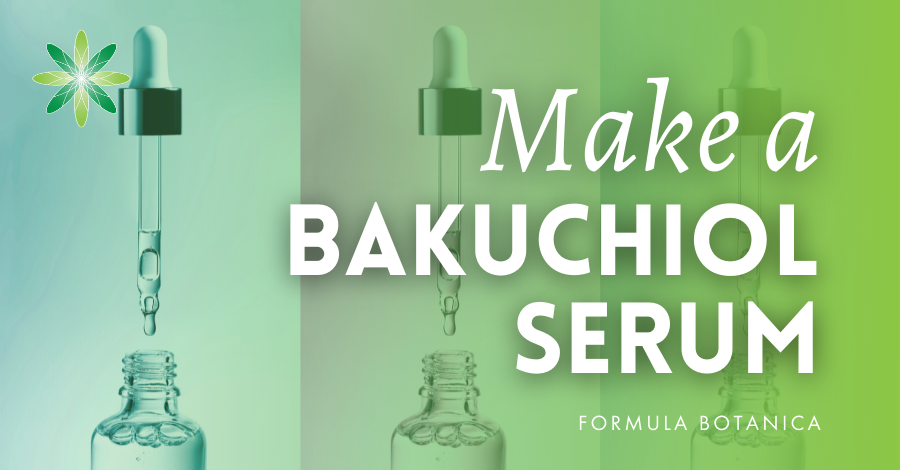 If you have not yet come across the bakuchiol vs retinol debate, then you’re in for an exciting revelation that has been making waves in the natural beauty industry. Bakuchiol, pronounced ‘back-oo-chiol’, and named after the Sanskrit word for the plant from which it is extracted, is native to Asia and has a long tradition and history of use in Indian and Chinese medicine.

It was not until the late 1960s that bakuchiol was isolated from seeds of the Psoralea corylifolia plant and researched more deeply for its various beneficial properties. It took until around 2007 to be used in a synthesised form in topical cosmetics. It is only relatively recently with further research, such as a 2018 study of bakuchiol vs retinol in regard to their clinical efficacy and side effects in improving common signs of cutaneous facial ageing, that bakuchiol has become an ingredient of significant interest, especially in the natural beauty sector.

Bakuchiol is often credited as the natural alternative to retinol. It is a plant-based ingredient (unlike retinol which is often synthetically produced) that is extracted from the seeds of the babchi plant. There are two main ingredients that are derived from the babchi plant; both of which we have used in this formula. The first is babchi or bakuchiol carrier oil which is cold pressed from the seeds; and the other is bakuchiol which is obtained through a proprietary monomolecular extraction process (known by trade name Sytenol® A).

The benefits of bakuchiol are very similar to those of retinoids but without the redness, skin irritation and photochemical instability that retinol is associated with. Bakuchiol is known to stimulate collagen production which has the benefit of reducing wrinkles and hyperpigmentation while increasing the skin’s elasticity and resilience.

It is also useful in products formulated for acne prone skin as it prevents the process of lipid peroxidation in the skin’s sebum by keeping the acid mantle active. This reduces the overproduction of bacteria on the skin’s surface and reduces the keratinization of cells.

The 2018 research we mentioned above concluded that “…bakuchiol is comparable with retinol in its ability to improve photoageing and is better tolerated than retinol. Bakuchiol is promising as a more tolerable alternative to retinol”. Also, as bakuchiol does not have the same photo-sensitising effect* on the skin as retinol, it can be applied in the morning but it is vitally important to apply a suitable sun protection factor (SPF) product afterwards.

What is a beauty concentrate?

The beauty concentrate we have created in this formulation is a lightweight serum with an emulsion base. It contains a high percentage of high-performance ingredients such as cold pressed oils, hydrosols as well as various extracts and actives. This product can be applied under a thicker cream or facial oil or used alone as a lightweight moisturiser. It may feel too sticky on some skins to be used alone on account of the high percentage of humectants in the emulsifier and from the glycerine and glycerite ingredients included.

As we have included so many heat-sensitive ingredients in this product, we have used an emulsifier that can create cold-process emulsions. The emulsifier we have chosen is Sucragel AOF. This is more widely known for its ability to create thick oleogels or gel-to-milk cleansers and masks.

One of the great benefits of using cold-process emulsifiers is the fact that you can use a much higher amount of heat sensitive oils in your emulsions without damaging them. A lot of the nutrients in carrier oils can be damaged by heat so by using a cold process, you maintain the benefits of these wonderful oils.

Bakuchiol vs Retinol? Find out why bakuchiol is the natural alternative to retinol in this @FormulaBotanica face serum formula. #bakuchiol #retinol #faceserum Click To Tweet 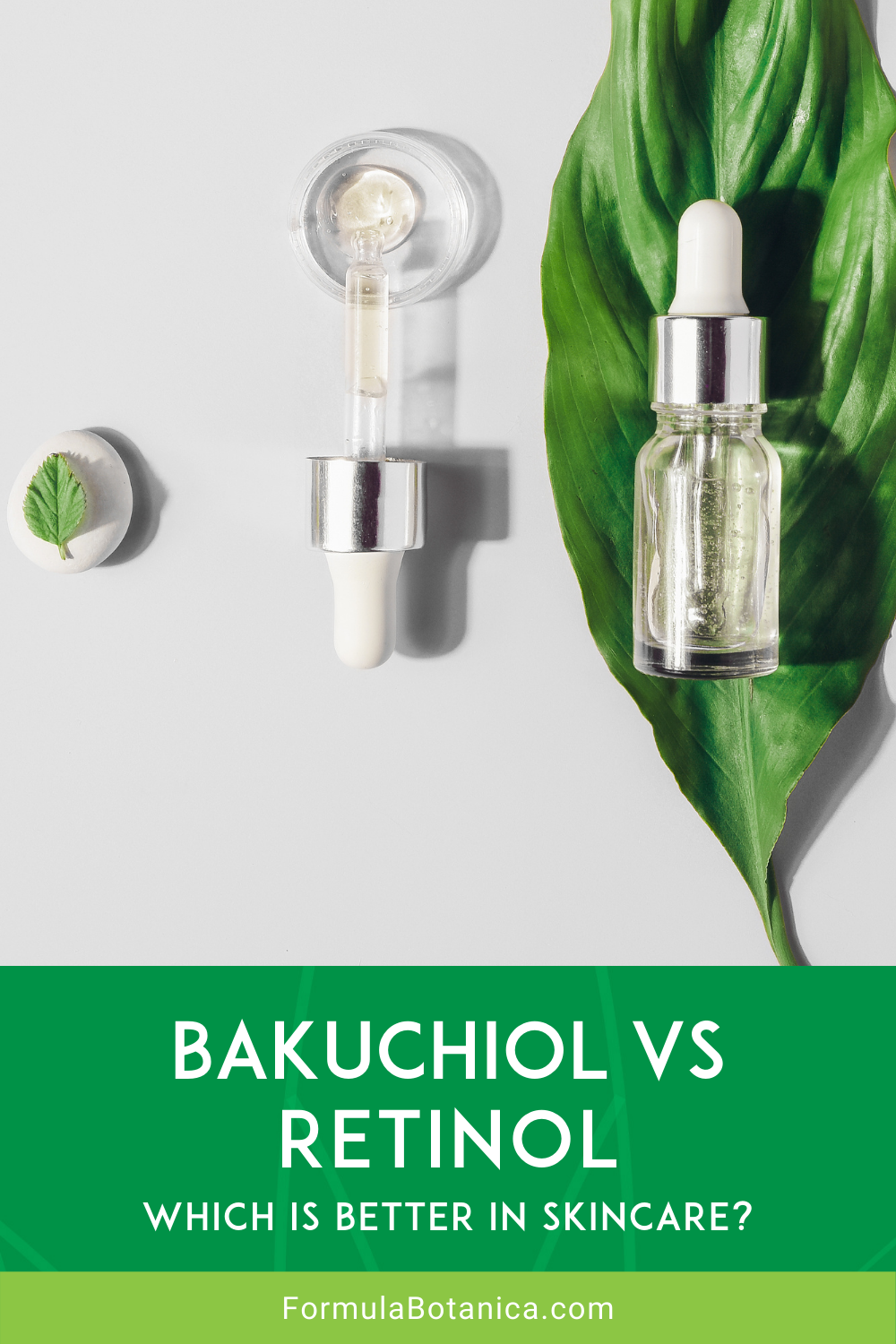 Watermelon is another ingredient that has had a lot of hype recently, and is especially apt an ingredients as we transition into the summer months in our part of the world. This oil is wonderfully light and absorbs wonderfully, leaving a non-greasy skin feel. It is rich in essential fatty acids (EFAs), especially linoleic acid, which balances out the oleic acid that’s naturally abundant in the sebum of acne prone skin, this in turn reduces clogged pores and oiliness without stripping the skin and leaving it feeling dry.

The high amount of linoleic acid in watermelon seed oil also means it is easily absorbed by the skin which can be used to help deliver active ingredients deeper into the skin. This means that it works very well alongside collagen-stimulating ingredients like retinol, or as in this case, bakuchiol.

The hyaluronic acid powder we have used in this formula is ECOCERT approved and has a very low molecular weight from 10 – 50kDa. It is a great ingredient for hydrating the skin as well as delivering active ingredients deeper into the skin. Hyaluronic acid is found naturally in the skin and by increasing the amount present, we can boost the skin’s hydration which can result in a more comfortable complexion without a greasy or sticky skin feel.

Caffeine powder has so many wonderful benefits when it comes to skincare. While it doesn’t quite work the same as a cup of coffee for your face, it does supply cells with oxygen and nutrients and it works to stimulate circulation and reduce puffiness. Caffeine is what is known as a vasoconstrictor which means that it constricts blood vessels. The theory behind applying this kind of ingredient on to inflamed or puffy skin is that it reduces the look of any inflammation. Caffeine is also another great ingredient for transporting actives into the skin which puts them where the skin needs them most. If you’re interested in caffeine as an ingredient, see it at work in our Caffeine and Pea Under Eye Serum. 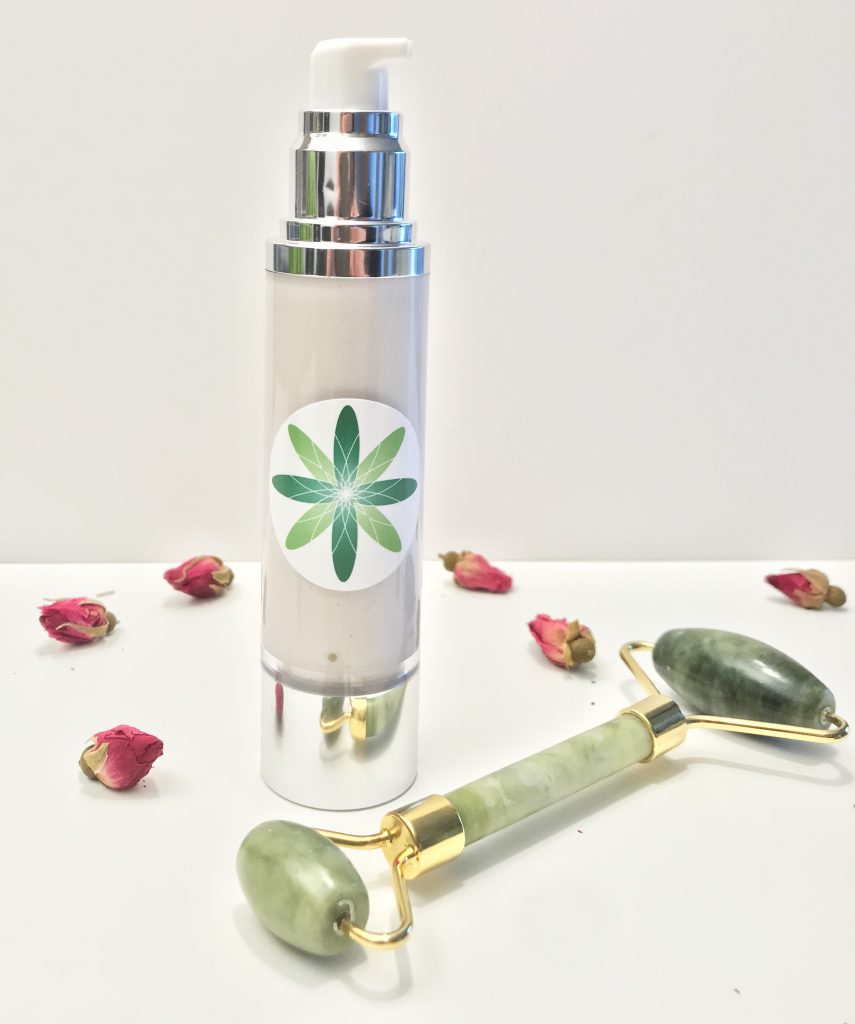 Our idea with this bakuchiol formulation is to create a light, cold-process emulsion packaged in an airless pump bottle that can be used as either a lightweight moisturiser or a serum to layer under a thicker cream. Some might find this formulation a little too sticky to be used alone but it is perfect under a heavier moisturiser or sun protection factor face cream and it can provide an extra layer of hydration while delivering all of the benefits of bakuchiol to the skin.

We encourage you to try making this simple formula to discover for yourself the outcome of the bakuchiol vs retinol debate by using the serum for a month or more. Don’t forget to leave us a comment below on your results.

Babchi oil contains naturally occurring compounds called psoralens which in certain circumstances can be phototoxic. For this reason we recommend using it sparingly, and always under 10% of the formula. In this case, in our formulation, we used a lower quantity of 5%. Bakuchiol (INCI: Bakuchiol) has these compounds removed, but you should always follow the manufacturer guidelines for use.

What are the benefits of bakuchiol for skin?

Bakuchiol is a powerful antioxidant known to stimulate collagen production which has the benefits of reducing wrinkles and hyperpigmentation while increasing the skin’s elasticity and resilience. It is also useful in products formulated for acne prone skin as it prevents the process of lipid peroxidation in the skin’s sebum by keeping the acid mantle active. This reduces the overproduction of bacteria on the skin’s surface and reduces the keratinization of cells. Overall bakuchiol is an excellent addition to skincare formulations for nearly all skin types.

Is bakuchiol better than retinol?

Bakuchiol vs retinol is common question. Bakuchiol is called the natural alternative to retinol in skincare but without retinol’s negatives. Bakuchiol is a collagen stimulator and aimed reducing the visible signs of lines and hyperpigmentation. Bakuchiol’s benefits are very similar to those of retinol but without the downsides of retinol which can cause redness and skin irritation and is prone to photochemical instability. This means that cosmetics containing bakuchiol can be used on sensitive skin and both morning and evening unlike retinol which must be use overnight only due to its photo-sensitising effect on skin.

What is bakuchiol made from?

Bakuchiol is a natural, plant-based ingredient unlike retinol which is often synthetically produced. It is extracted from the seeds of the babchi plant. The ingredient comes in two forms: either as babchi or bakuchiol carrier oil which is cold pressed from the seeds; or as a high-performance bakuchiol extract usually as a manufacturer’s proprietary form.

Where can I learn to formulate natural skincare and haircare?

Join us at Formula Botanica, where tens of thousands of students and followers take our free and paid online courses to learn how to formulate organic skincare and haircare for themselves or to sell and also how to set up a beauty brand and business.