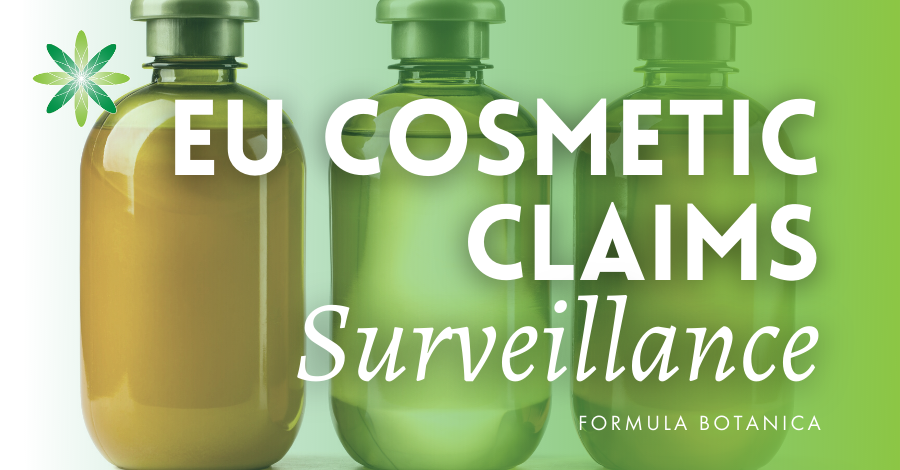 Cosmetic claims are a minefield in the global personal care industry. Most countries prevent you from making medicinal or pharmaceutical claims for your skincare products, and certain regulatory bodies set further requirements. The European Commission asked EU countries to undertake cosmetic claims surveillance in 2015 and we’ve published a summary of their findings.

What’s the problem with Cosmetic Claims?

The ‘problem’ with skincare is that from a legal perspective it’s supposed to be cosmetic. It makes your skin look healthy and nourished, but it isn’t supposed to have any medicinal or therapeutic properties. This can be very frustrating for those people who entered the skincare industry with a burning passion to cure certain skin conditions – particularly for those people who have spent months of their time researching different botanical extracts and their healing properties.

However, despite the rise of the cosmeceutical skincare product, government agencies all around the world do not recognise this cross between cosmetics and pharmaceutical products. And this is probably a good thing because if they did, you would most likely have to test and sell your products under rigorous pharmaceutical and medicinal standards which would make it prohibitively expensive for most people to start a skincare business.

If you want additional guidelines on what kind of claims you can and can’t make, the EU Commission published this handy document alongside the EU Cosmetics Regulations. The FDA also have a number of webpages on what they consider to be drug claims for cosmetics.

Let’s have a look at the general categories they looked at in more detail:

Sixteen countries found cases of products claiming a function that could not be supported with sufficient evidence, with the available studies lacking reproducibility and scientific strength.

This was also the case for claims highlighting the function of one of the ingredients to be the function of the final product. Due to the low concentration of the substance in the product, its effectiveness could not been achieved. For example, such products claimed to have a sun protection effect or not to contain any allergens. These claims were considered to be dishonest.

Ten participating countries found claims stating a cosmetic product’s medicinal effect, which breaches a number of cosmetic claims criteria. These countries also highlighted increased difficulties to distinguish and classify borderline products, i.e. whether a product is a cosmetic or a medicine or a medical device.

Most countries identified claims with a medicinal effect as being the most dangerously misleading claims for consumers. Believing that a cosmetic product has therapeutic effects and medicinal properties could lead consumers to delay seeing their doctor and follow their own treatment. Such misleading claims included therapeutic effects on skin, blood circulation, deeper tissue, muscles, joints, veins or adipose tissue, anti-inflammatory function, and healing properties.

Ten countries raised the issue of certain claims breaching the ‘fairness’ criterion in the claims checked because these products were denigrating authorised ingredients. Such claims include for instance ‘free from parabens’ or ‘free from aluminium’.

20% of the monitored cosmetic products had a ‘free from’ claim and many of them were ‘free from parabens’. The European Commission agreed that this claim is attractive for marketing purposes because of the media attention received by parabens. However, they also consider that this type of claim is against the ‘fairness’ criterion because it denigrates legally authorised ingredients.

On the other hand, many countries stated that claims addressing the absence of ingredients such as alcohol, essential oils or soap were considered to be compliant as it is essential for the consumer to be able to choose to avoid these ingredients for specific reasons such as religion or allergies.

Some Member States notified that cases of claims highlighting the absence of prohibited ingredients, as well as claims mentioning adherence to EU quality standards and Good Manufacturing Practice. These were all considered non-compliant, breaching the ‘legal compliance’ criterion.

Quality standards and GMP should be met as a minimum by all cosmetic manufacturers in the EU, so this type of claim cannot set your business apart from others. Such claims can create confusion for consumers and increase competition with other manufacturers who also comply with the Cosmetics Regulation but do not make this clear.

Seven Member States reported cases of ‘hypoallergenic’ claims made on products without supporting documents or evidence.

Some national authorities notified claims made about hair dyes, according to which the dyes contained ingredients that guaranteed or offered protection from skin problems (or reduced the risk of allergy) during the colouring process. These products nonetheless contained resorcinol and para-phenylenediamine, which are well known allergens.

Claims that attempt to underestimate the risks of allergic reactions associated with the use of hair dyes pose a risk to human health and may prevent consumers from making an informed choice to use the product.

6. Claims on the presence/absence of ingredients although they were not found/found in the product

Five Member States reported cases of absence of ingredients mentioned in a product claim, which breaches the ‘truthfulness’ criterion.

7. ‘Not tested on animals’ and the rabbit logo

Four Member States found cases of non-compliance with the ‘evidential support’ criterion when, although products were claiming to be ‘not tested on animals’ through the presence of the rabbit logo or text, the responsible person did not have evidence of this for all the cosmetic components. Since 2013, the Cosmetics Regulation prohibits using cosmetics or substances tested on animals as part of the final cosmetic product.

This EU-wide review found that 90% of analysed cosmetic claims were compliant with the common criteria set out in EU regulations. However, all EU countries that contributed to this report agreed that there is a need to clarify ‘free from’ and ‘hypoallergenic’ claims. This will be done through the existing sub-working group on claims and ad hoc technical documents on the two issues, so watch this space in the coming years.