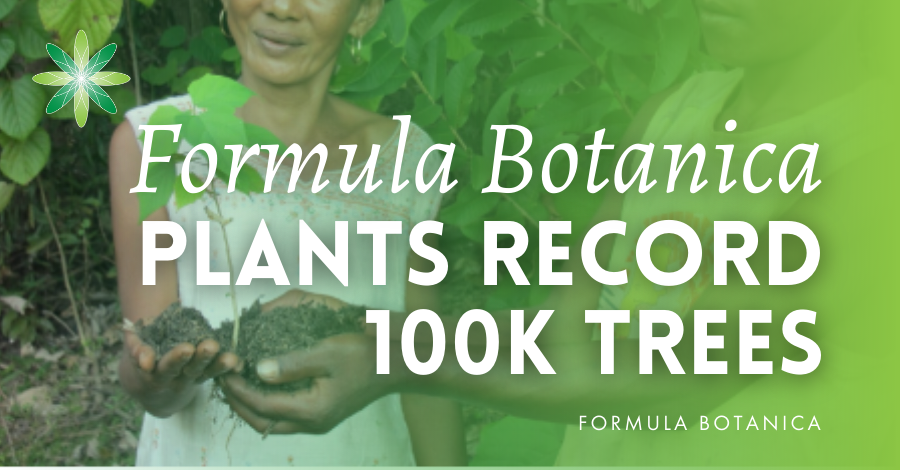 This year at Formula Botanica, we once again met our record annual donation to charity of £30,000 which we share between the not-for-profit organisations Plantlife and TreeSisters.

While the world was focusing on the UN Climate Change Summit (COP26) in Glasgow, Formula Botanica’s partner charities were working tirelessly out of the media spotlight to make a difference to climate change. Through their on-the-ground actions, Plantlife and TreeSisters are helping sequester carbon, promote biodiversity and build sustainable livelihoods for people across the world.

To date, Formula Botanica has donated around £100,000 to charity and we have year on year increased our contributions to reflect our own growth. Plantlife and TreeSisters are a conscious choice for us as a leading voice in the green beauty space and with our students and graduates operating in a sector reliant on sustainable, natural ingredients.

Our mission at Formula Botanica is to help train the next generation of indie beauty formulators and business founders to be conscious of their own environmental impact and that of the beauty industry in general. Formula Botanica CEO Lorraine Dallmeier said that the school was bringing sustainability issues centre stage at every opportunity, both in its curriculum and across its media platforms.

“It is our responsibility as a leading, award-winning training entity in the field of natural beauty to drive home the need for all of us involved in the sector to do more than pay lip service to sustainability. For far too long, we’ve seen the mainstream beauty industry fail to tackle some fundamentally unsustainable practices; chief among which is an economic model built on promoting the over consumption of beauty products to fuel the industry’s growth and profits. This has to change.

“The beauty industry is also one of the heaviest consumers of natural resources and responsible for monoculture ingredient crops that are detrimental to biodiversity. It is therefore only right that the industry, whether as educators, growers, cosmetic manufacturers, retailers and more, should not only work to reduce its own resource exploitation and consumption but also support entities such as Plantlife and TreeSisters who are helping to restore natural habitats and biodiversity,” said Dallmeier.

Ian Dunn, Plantlife CEO, said that the charity was delighted to be working with Formula Botanica and its worldwide body of students. “Almost irrespective of what was achieved at COP26, the real action is going to be ‘on the ground’. Formula Botanica’s multiplier effect can be staggering. With over 14,000 students and graduates in over 175 countries – each exercising a voice about a sustainable future, a greener one, a botanical one – the Formula Botanica community is truly impactful,” said Dunn.

TreeSisters’ founder Claire Dubois said that Formula Botanica was a deeply-aligned partner set on a mission of reciprocity with nature and restoration of the tropical forests and was instrumental in helping them towards their goal of planting 20 million trees.

“With this latest donation of just over £15.5K, Formula Botanica has reached its own milestone of funding 100,000 trees to be planted in the tropics and is well on its way to reaching its goal of seeing its Formula Botanica Forest reach 250K trees by 2025. We wish every growing company were as generous and climate-change focused,” said Dubois.

At Formula Botanica, we encourage our students to donate to TreeSisters and support Plantlife and their voluntary pledges have helped boost our corporate donations to make a real difference to the charities’ work.

Last year, Formula Botanica became the largest, single corporate donor to Plantlife. Our support has helped Plantlife with a latest project restoring threatened UK juniper tree habitats from overgrazing and fungal infections resulting from a changing climate. Plantlife’s Ian Dunn said it was hugely fulfilling and this complex conservative work could not be undertaken without partnerships with like-minded organisations such as Formula Botanica.

Formula Botanica Partner Manager Ken Hoellmann said that the positive fieldwork of the school’s chosen charities was having immediate results: “Together, Plantlife, TreeSisters and Formula Botanica put out a strong educational message to our students and graduates about the need to focus clearly on sustainability. We are not only inspiring our students but also seeing them deliver indie beauty products to market that are making a clear change to the traditional, unsustainable, beauty industry model.”